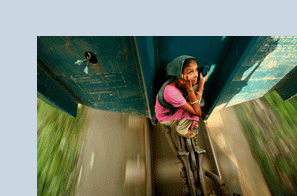 Photographer: G.M.B.Akash, Bangladesh, guest in 2007. As a direct result of his work „Marginal Worlds“ he became a politically persecuted person in his home country.

We look forward to the next foundation guests!

Rana The scriptwriter and filmmaker Rana (pseudonym) produces each of her films under high stress and says she always has to expend a lot of energy to avoid thinking about the consequences threatened in her country. In Germany, she would like to think about a new screenplay.
Pressemitteilung Rana (Pseudonym)

Nazanin As a contemporary composer and musician, Nazanin (pseudonym) also faces major problems in her country. Although she is considered a great talent in her field, public performances in her home country remain forbidden to her. She wants to get to know the work of her European colleagues, make new contacts and be able to work “without scissors in her head” for once.
Pressemitteilung Nazanin (Pseudonym)

Mary Wine (Pseudonym) (name has been changed) is a new guest of the Hamburg Foundation for the Politically Persecuted People. She is a courageous TV and print journalist whose story we cannot publish here for security reasons.
Link to Press release

Heval Bozbay. The Kurdish archaeologist Heval Bozbay successfully searched fo testimonies of the past civilization on the territory of today’s Turkey. Because of his public criticism of the Turkish Minister of Culture, Bozbay has been banned from all archaeological excavations since 2013.
Link to Press release

Masrat Zahra is a photojournalist comes from the disputed region of Kashmir which is claimed by both India and Pakistan. Since 1989, an armed insurgency led local Kashmiris and supported by Pakistan has been raging in the scenic region against the Indian rule. She has already been honoured with important international awards for ex. in 2020 the ” Peter Mackler Award” and the “Anja Niendringhaus Award” for courageous photojournalism.
Link to Press release

Tatsiana Tkachova. The award-winning photographer quit her permanent job at a state-owned daily newspaper, her contribution not being part of the system.

„STIMMEN FÜR DIE FREIHEIT”
The podcast of the Hamburg Foundation.
Johannes von Dohnanyi introduces – but not only – current and former guests of the foundation.

All episodes can also be found here:

persecuted people who, be­cause of advocating

situation in their native countries.