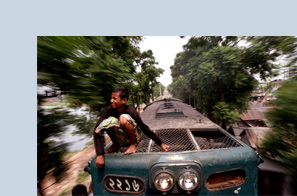 “Why we are committed to the freedom of speech and to those fighting for it?

It is because we know that real freedom cannot exist without the freedom of speech. Democracy feeds off free press, free arts, free literature, and photography.”

Yet, we also get involved due to the responsibility we feel as Germans. Each of us knows about the fate of an individual or of whole families, who during the Nazi regime were persecuted, tortured, or murdered for political, religious, or racial reasons. Until 1989, freedom was not respected in our divided country and people were intimidated for having deviant ideological beliefs. Those who raised their voices were harassed and arrested. Those who wanted to escape from the unjust state risked their lives.

The personal or historical proximity to these past times prompts us to help people all over the world, who boldly raise their voices against injustice, by providing them with refuge, serenity, and a sense of security for a certain amount of time.

And we do that as citizens of Hamburg: Protecting the freedom of speech is part of the great Hanseatic traditions. Not least because of this, our city is the major German media center, where resident publishing houses, agencies, and production companies are highly successful and influential.

But this tradition also entails the obligation to stand up for those who cannot speak, write or publish freely in their home country.

This is the reason why we, the Board of Directors of the Hamburg Foundation of Politically Persecuted People, are committed to all those who are denied these fundamental rights. We, who live on the safe side, must help those, who have not yet reached similarly safe ground.”