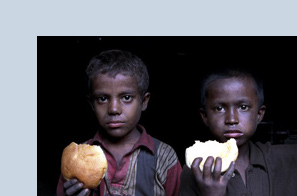 “Prize for the Freedom and Future of the Media” 2014 goes to fighters for a pluralistic society from yesterday and today
(press release 24.07.2014)
download

Photographs by G.M.B. Akash are famous. But usually, the people in the photos don’t benefit. Akash intends to change this practice.

Since 1987, 130 people, who ran into danger because of words or photographs, found a safe haven at the Hamburg Foundation for Politically Persecuted People.One of them is G.M.B Akash, a photojournalist from Bangladesh, who came to Hamburg in January 2007 and shall serve as an example for all of them.

Then 30-year-old Akash, who taught himself the craft of photography, had received death threats by Muslim fundamentalists because an Asian magazine as well as GEOlino (an educational German magazine) had published his report on everyday life in a Quran school. It included a photograph of a 7-year-old in chains. Akash had been warned against having it printed but he would not succumb to their attempts at intimidation. In Germany, Akash also found photographic subjects that kept him busy. The adversities of those marginalized had already drawn his interest in his home country, making train surfers, prostitutes, homosexuals, child laborers, or people living in garbage dumps the leitmotif of his work. In Germany, he created a photo series about homeless people, elucidating the growing discrepancy between consumption and luxury on one side and poverty and homelessness on the other. Since his return to his home country, he has been placing his talent at the service of the poorest of the poor by providing basic aid: he shares the fees earned with his photographs with the photographs’ subjects and thus helps them build a new life endowed with dignity and income. “Often, one year spent living in Germany changes our guests’ perception. That’s the idea behind the Foundation. It not only protects but also promotes social and cross-cultural understanding,” the Board of Directors explains. “It is the age-old dream of building one world and one humankind, a dream we also pursue.”